What Makes a Great Training Video – Tell a Story

To tell a story, it all starts with Aristotle – Ethos Pathos, Logos

Aristotle developed three keys to effective writing: the artful application of ethos, pathos and logos – the use of character (or credibility), logic (or reason), and emotion respectively. An excellent example is in the TV series Star Trek. It is expressed through the individual roles of the fictional characters: Captain Kirk (character), Spock (logic), and Dr. Bones (emotion). The screenwriters of the series purposefully built a charismatic leader who was often buffeted by appeals to reason and/or emotion as a foundation for compelling story telling.

Motivating participants to sit through training material is becoming increasingly difficult and critics are quick to point out that staring at a small screen is inherently problematic. In the end trainers feel pressed to employ motivational strategies (such as making training mandatory or sending test results to managers.)

Unfortunately, training via a computer often is problematic—think of the numerous distractions; absence of social consequences for quitting; and the tedious read and click environments. Screenwriters have been wrestling with many of the same motivational issues for years and have found ways to keep eyes glued on the big (and little) screen. In fact, building a three act screenplay is as formal and structured a process as designing training; the only difference is the dramatic structure is hidden under plot whereas instructional design is often conspicuously apparent throughout.

The differences in how screenwriter and instruction designers develops content are outlined below: 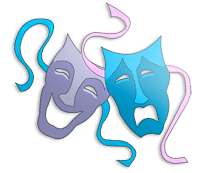 –Tell them what you’re going to say (Intro)

–Say it (The Course)

–Tell them what you’ve said (Summary)

Creative instructional designers don’t restrict their training to the premise that eLearning (or any other self-driven learning methodology) requires extrinsic motivational elements for successful completion. Training can be intrinsically interesting and motivating. Screenwriters have been building such interest for years, and what follows are five techniques they use that can be equally effective in instructional design.

Secret #5: Hold Something Back

This series of blog entries is not how to make a great training video, but explains the elements of a great a great training video. Many thanks go to Platte Clark who has developed some of the best video based training scripts Xcelus has produced using the power of story. This information comes from a white paper and presentation we co-developed for a local ASTD event in 2006.